VANCOUVER, Nov. 20, 2018 /CNW/ – Metallis Resources Inc. (TSX-V: MTS) (OTCQB: MTLFF) (the “Company” or “Metallis”) is pleased to announce a new gold/silver discovery on the Company’s 100%-owned Kirkham Property located in the heart of the Eskay Camp.  The Etta vein discovery occurs at the northern end of the 7.5km long mineralized Hawilson Monzonite Porphyry Complex, west of the Cole target. 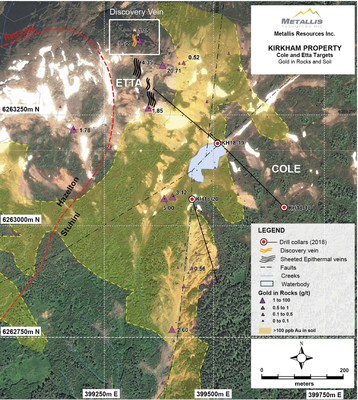 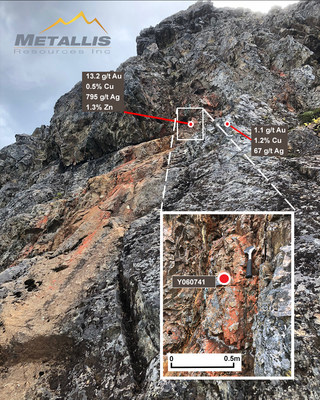 During the 2018 field mapping program, a steeply dipping epithermal vein with ~10 meters strike length and ~0.5 meter width, was discovered on a north facing cliff at the Etta target. The quartz-calcite vein demonstrates drusy textures and remains open along strike. The discovery has led the geological team to re-interpret the historic geochemical anomaly at Etta as part of an epithermal system proximal to the Hawilson Monzonite porphyry.

Dr. Abdul Razique, Metallis’ Chief Geologist, commented: “Etta represents an exciting new prospect that fits the classic epithermal model that hosts many significant deposits throughout the Cordillera of North and South America.  Such a zone typically forms as the uppermost shell above or distal to a sub-alkaline porphyry deposit. This has us more encouraged than ever about the high-grade gold and large-scale porphyry potential at Kirkham.”

Drill results from the Cole and Nina targets have been received from the assay labs and are currently being analyzed and interpreted by Metallis’ Technical team. They are due for release shortly.

Metallis Resources Inc. employed a rigorous QA/QC program to ensure best practices in sampling surface rock chip samples of approximately 1 kg in weight. The samples were delivered to ALS Global prep facility in Terrace, BC, where the samples were crushed to 70% pass 2mm fraction, and then a 250g split was pulverized to better than 85% passed a 75-micros screen. The geochemical analyses were performed by ALS Global in Vancouver using multi-element 4-Acid digest ICP-MS package (ME-MS61). Gold was analyzed by fire assay technique Au-ICP21. Higher gold grades (>10 g/t) were analyzed by fire assay and gravimetric finish. ALS laboratories are independent of the Company and have used internal QAQC protocols.

Technical aspects of this news release have been reviewed and approved by David Dupre, P.Geo., designated as a qualified person under National Instrument 43-101.

About the Kirkham Property

The 106 sq. km Kirkham Property is located about 65 km north of Stewart, B.C., in the heart of the Golden Triangle’s prolific Eskay Camp.  The northern border of Kirkham is contiguous to Garibaldi Resources’ E&L Nickel Mountain Project.  The northeast corner of Kirkham is within 12 km of the Eskay Creek mine while the eastern border is within 15 – 20 km of Seabridge Gold’s KSM deposits and Pretium Resources’ Brucejack mine.

Metallis Resources Inc. is a Vancouver-based company focused on the exploration of gold, copper, nickel and silver at its 100%-owned Kirkham Property situated in northwest British Columbia’s Golden Triangle.  Metallis trades under the symbol MTS on the TSX Venture Exchange and currently has 32,986,079 shares issued and outstanding.

Metallis Resources Inc. was included in the 2018 Venture 50 (the “V50”). The V50 is a ranking of top performers on the TSX Venture Exchange each year and is published early in each following year. The ranking comprises 10 companies from each of five industry sectors selected based on three equally weighted criteria: Market capitalization growth, share price appreciation and trading volume amount. To view the V50 video click here.

On behalf of the Board of Directors:

Neither TSX Venture Exchange nor its Regulation Services Provider (as that term is defined in policies of the TSX Venture Exchange) accepts responsibility for the adequacy or accuracy of this release. The TSX-V Stock Exchange has neither approved nor disapproved the contents of this news release.

Menu
This website uses cookies to improve your experience. If you continue to use this site, you agree with it.
Ok